TODAY IN THE HUNTINGTON POSTAli A. Rizvi: Religious Fundamentalism Spreads... Beyond Islam

In the same week that Hindu fundamentalists obliterated plans to build a Charlie Chaplin statue, on the grounds that Chaplin was a Christian who made no contribution to India, video clips of Bharatiya Janata Party (BJP) candidate Varun Gandhi surfaced online, showing him glorifyingly speaking of "cutting the throats" of Muslims, and mocking their "scary" names.

Meanwhile, the Hindu nationalist group Sri Ram Sena vowed to continue its attacks on women drinking in bars and couples courting in public -- expanding their target population to include female British tourists in the city of Goa. 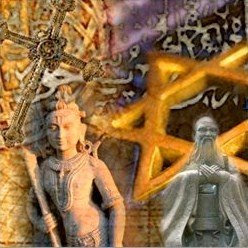 In the Varun Gandhi videos, Hindu extremist groups like the Taliban-inspired anti-statue, anti-woman Sri Ram Sena may feel as if they've found a high-profile voice: Varun is the grandson of late Prime Minister Indira Gandhi, and the great-grandson of Jawaharlal Nehru, India's first prime minister, a declared secularist and atheist who couldn't have been more removed from his descendant's crazed religion-fueled nationalist diatribes.

It isn't just the Hindus. Mere days after ending the controversy over his lifting of the excommunication of Holocaust denier and 9/11 conspiracy theorist Bishop Richard Williamson, Pope Benedict XVI decided to elaborate further on his view that abstinence works 100% of the time as a birth control method (right, ask The Virgin Mary how well that worked for her) by declaring that the use of condoms aggravates the spread of HIV/AIDS.

Now, the Pope has publicly pulled several other Ahmedinejads in the past. He has written that homosexuality is an "intrinsic moral evil" and an "objective disorder." He has also claimed that non-Catholics are in a "gravely deficient situation," without the "fullness of the means of salvation." Most recently, the Vatican declared its support for the Brazilian Church's decision to excommunicate of a group of doctors who performed an abortion on a 9-year old girl -- pregnant with twins -- as a result of being raped by her stepfather.

However, these two examples are unique: one of these men is the most significant spiritual and religious leader in the world, and the other belongs to a family that gave the world's largest democracy three of its most legendary prime ministers, including its first.

So, is Talibanization going mainstream? To religions beyond Islam?

Well, we know that the Catholic authorities aren't throwing acid on teenage girls' faces like the Taliban do. That, actually, is something that Jerusalem's Jewish Haredi Modesty Patrol did to a 14 year old girl last year. Her crime? Wearing pants. In the same week as the Pope's condom controversy and Varun's inflammatory videos made news, a member of the Modesty Patrol was sentenced to four years in prison in a separate incident -- a sexual gang assault on a divorced woman.

Although it's tempting to dismiss these incidents as aberrations, religious extremism and bigotry do seem to be going mainstream in Israel. On the same day that the Modesty Patrol mercenary was sentenced, news broke that Avigdor Lieberman, the right-wing hardliner whose Israel Beiteinu party had a strong showing in Israel's recent elections, is in consideration as Israel's next foreign minister.

Lieberman is a man who has, among other things, openly advocated the expulsion of Israeli Arabs from the Promised Land, and offered to provide buses to transport Palestinian prisoners to the Dead Sea, where he has recommended drowning them.

More disturbingly, Lieberman suggested in 2006 that Israel should conduct itself in Gaza like Russia did in Chechnya, that is, without any concern for civilian deaths. This moves the issue beyond the realm of aberrant extremist ideology, not only because Lieberman is now a prominent leader in the Knesset possibly destined to become Israel's foreign minister, but because his suggestion was put into practice in a significant way during Israel's recent offensive in Gaza.

In last week's investigation into the Israel-Gaza conflict, IDF soldiers talked about how they were encouraged to kill Palestinian civilians. They also described how the assault was framed as a religious war by military rabbis, who distributed literature to the troops saying among other things that this was a holy war, that "we came to this land by a miracle, God brought us back to this land" and that they needed to "fight to expel the Gentiles who are interfering with our conquest of this holy land." Somehow, Israeli authorities appear to be drawing inspiration -- like Hamas -- from the likes of Saudi Arabia, Iran, and the Taliban. 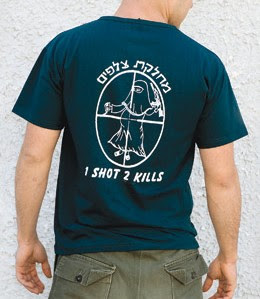 Meantime, the Adiv fabric-printing shop in south Tel Aviv sold hundreds of T-shirts, caps, and other items of clothing custom-made for Israel soldiers, featuring pictures of dead children and bombed mosques. Included was one of a dead baby clutching his teddy bear, his mother weeping at his side, bearing the inscription, "Better Use Durex."

In Canada, a different aspect of religious fundamentalism surfaced last week, when Federal Science and Technology Minister Gary Goodyear, a central figure in the controversy over the science funding crunch in the country, was asked whether he believed in evolution. He refused to answer. "I'm not going to answer that question," he said. "I am a Christian, and I don't think anybody asking a question about my religion is appropriate." The Pope, I'm guessing, would have been a little more unequivocal in his response.

These events, most of which occurred in the span of one week, are reflective of a dangerous resurgence of religious fundamentalism in non-Islamic countries. The most perplexing part of it is that it isn't just limited to a few seemingly random incidents fueled by fringe extremist groups. The characters in these stories -- the Pope, a member of India's Nehru-Gandhi dynasty, a powerful Knesset leader, and a Canadian federal minister -- are influential, mainstream figures whose ideas and decisions impact the lives of billions of people every day...

Thank you for piling on the plate of hateful dangers religious fundamentalists of any strip, tent, tribe, calling, or claim. A fundy is a fundy. Different garb, language, food; same sick soul. Why obsesses about the mote in my neighbor's eye when mine are filled with them? Let's clean up our own backyards, police our own nut jobs versus full-time demonizing of others.