Does Your Vote Really Count? 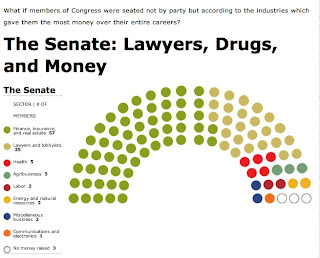 With more than half of the Senate bought and paid for  by Big Finance, Insurance & Real Estate,  do you really think the guys that are supposed to be representing you in the Senate are listening to you at all?
If you do, you probably also think Santa Claus is real and the Tooth Fairy as well.
We live in a completely corrupt society where money and only money talks and you have to put up or shut up. Wake up and smell the coffee and unless you've got at least ten million in the bank don't try to get in to the politics game because only suckers play in a game where the cards are stacked against them
Posted by 1000myths at 9:07 AM

I knew it was bad, but this graph really highlights what I suspected all along.

No wonder I feel like an anarchist in a strange land...