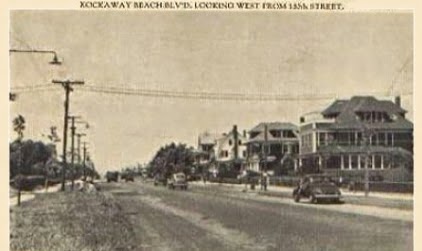 Rockaway is a beach community on a narrow peninsula about 12 Miles from New York City. I don't think I ever heard anyone call Rockaway the "Irish Riviera" For several years It was a kind of paradise for me and my cousins. We spent summers there in a two story bungalow on 116th St about 50 yards from the boardwalk and the beach.
My mother and a few of her ten sisters, along with husbands and kids (my cousins) shared the bungalow in the summer. My cousins, Patsy, Kathleen, Billy and I shared a bedroom on the second floor. We usually slept in our bathing suits, sand and all so we were out and about - as soon as the sun rose. We'd head straight to the beach to collect empty soda bottles to redeem at the supermarket. Billy, the oldest, had a sieve that he had made from an orange crate, screening wire and two broom handles that he used to collect loose change and miscellaneous items like rings, watches and other valuables that had fallen in the sand the day or night before 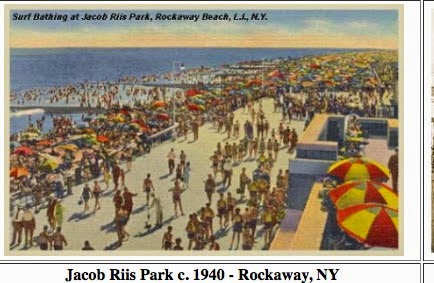 After we'd combed the beach and sifted some sand we'd stop at the A&P supermarket to redeem the soda, beer and milk bottles we'd collected, buy something for breakfast and then stop at the bungalow to eat.  Sometimes it would be "Wheaties ,"Rice Crispies" or Velveeta on a roll 0r occasionally a Hershey bar and a glass of milk. There weren't usually any adults around before noon. A far cry from the over- supervised "smother love" of today. 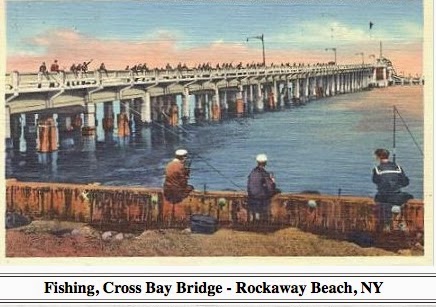 After breakfast we might go over to the Bay (Jamaica Bay) and try to catch a few crabs or dig some clams. My cousin Billy would fish with a "drop line" - fishing line on a spindle-like thing with the usual hook, line & sinker . Then back to the beach and boardwalk, stopping at the hot dog stand or the corn-on-the-cob place for lunch. By lunch time there was usually a crowd at the 116th St. Beach- including a lot of soldiers and sailors especially on the weekends. At night the boardwalk was patrolled by soldiers with rifles and helmets, on the lookout for German U-boats and making sure that no lights were visible at sea. We swam in the ocean (one of our uncles, Billy's dad, was captain of the 116th St. Lifeguards) and we all had learned to swim in the ocean by the time we were five. We rode the waves (bodysurfing) and hung around groups of soldiers and sailors with their girlfriends.
We'd go home for supper when the beach started emptying and after eating we'd get ready for the evening's activities. Sometimes one of us would buy a ticket for the movie house whose back door was adjacent to our bungalow and then he'd prop the fire exit open and all of us would sneak in. Sometimes we'd get to watch the whole show, usually a "double feature" and sometimes we'd get caught by the ushers and get thrown out but after a while the ushers knew us all and it got very hard to sneak in without getting caught. 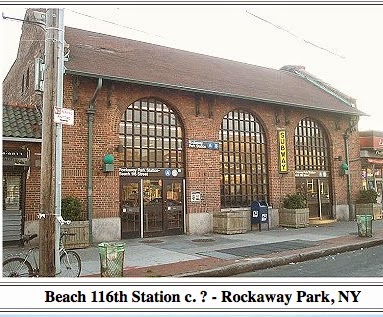 The morning papers- The Daily News, The Mirror and The Journal American, were delivered to the newsstand at the Long Island Railroad station every night between eight and nine PM. We'd buy ten copies of The News and The Mirror and take them up to Curley's Bar in the basement of  Curley's Hotel and Bath House and sell them for a nickel and often more to the patrons of the bar. Mosly soldiers and sailors and their girls. After we sold the papers my cousins Patsy and Kathleen would do a jitterbug exhibition and the soldiers and the girls would clap and throw money, mostly nickels and dimes with an occasional quarter. Most nights we would go home, usually around ten, with at least two dollars profit which was pretty good money for three eight year olds in 1942. 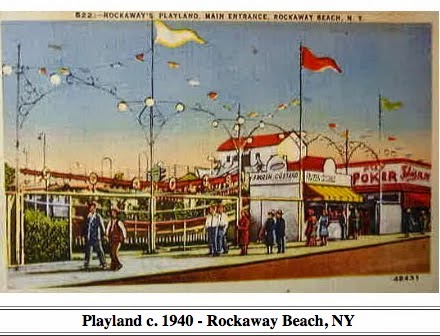 Rockaway's amusement park, Playland, was about a mile or so from our bungalow on 116th St. We take the bus there once or twice a month. The Fun House was on of our favorites as well as the Roller Coaster, the Merry Go Round and the Bumper Cars. We'd have dinner there- Hot Dogs, fries and cotton candy. Then we board the bus for home and our sandy beds in the bungalow. 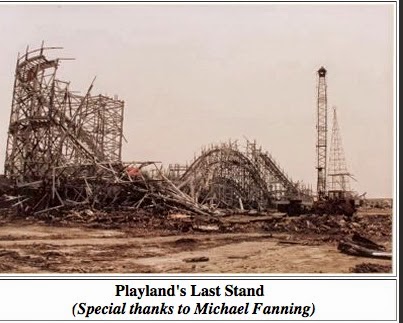 They tore Playland down in 1987 and built about 300 condos on the site and that was the end of " Old  Rockaway" I drove out there about 20 years ago but by then not much remained to help me recapture "the good old days" but the excitement, adventure and freedom will live forever in my mind. I can't help but feel sorry sometimes for my children and grandchildren who never sifted the sands or jitterbugged at Curly's. Soccer and tennis lessons, swim team etc. are OK but they're not the same.