BAGHDAD, Nov. 6 — Six American soldiers were killed in three separate attacks Monday, the military said today, taking the number of deaths this year to 851 and making 2007 the deadliest year of the war for American troops.

Didn't the White House just tell us that the surge was working?
Seems like the obvious is happening exactly as we should expect- the more live bodies we ship to Iraq, the more dead ones come home. Maybe this is some kind of a Malthusian solution to the continued shrinking of job opportunities for our young people without M.B.A's or technical skills? Or maybe it's just a grim reminder of the futility and senselessness of the Bush "Shock and Awe" doctrine. (Read Naomi Klein's The Shock Doctrine
to get a clear picture of what Bush, Cheney & Co. are up to and why)

We stopped the VietnamWar by protesting but it almost seems as if nobody is very upset by what's going on in Iraq or at least not upset enough to get off their butts and out into the street. You can say all you want about the "Flower Children", the Hippies et al but at least they got the job done.

Walking the Italian "Wild Side" 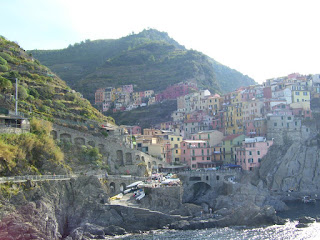 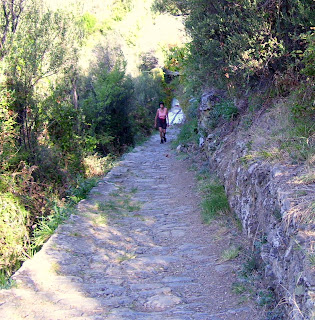 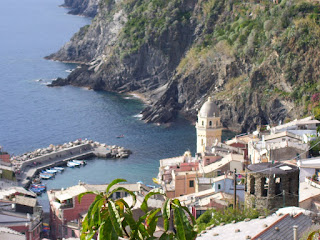 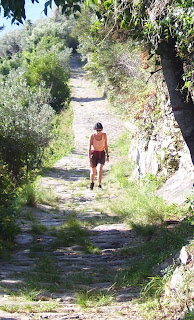 Cinque Terre is an Italian National Park area on the Mediterrenean coast midway between Genoa and Pisa. The name "Cinque Terre" refers to the five villages in the Park area: Vernazza, Monte Rosso, Corniglia, Manarola and Riomaggiore. Travel within the five village area is either by foot, along the paths cut into the seashore cliffs or by boat.
The footpaths are often steep and narrow - it took me and an hour and a half to walk the three miles between Vernazza and Corniglia. The incredible sea views made it worth the effort. We stayed in the village of Vernazza for the five days we spent in Cinque Terre, eating in local restaurants where the local seafood is a staple.

G. W. Bush invaded Iraq with the goal of bringing democracy to its unfortunate citizens. The effort has been an abysmal failure as the breakdown in the oil field now demonstrates. It appears as if there are some countries where, for a variety of reasons , some chronic and others temporary, the only suitable form of government is either a very loose form of Federalism with "separate but equal" regional governments or a rigid dictatorship where order is maintained through brute force and dissidents are dealt with harshly. The area that was previously known as Yugoslavia is an example - another is Iraq. Obviously, the Sunnis, the Shia and the Kurds are not going to "get along together" any time in the near future - too much blood has been shed on all sides. Like Spain in the 1930's, two opposing foreign coalitions, are using the country as a venue for their ideological conflicts.
We never should have gotten involved in Iraq in the first place and the prospect of ten more years of occupation is obscene. We no longer have any chance of "saving face" in Iraq but let's at least not lose any more American young people there.
Posted by 1000myths at 7:17 AM No comments:

Jhumpa Lahiri was awarded the 2000 Pulitzer Prize for fiction, as well as the PEN/Hemingway Award for her mesmerizing debut collection of stories, Interpreter of Maladies. Her poignant and powerful debut novel, The Namesake was adapted by screenwriter Sooni Taraporevala, and released in theaters in 2007.

My life always stops for a new book by Michael Ondaatje. I began Divisadero as soon as it came into my possession and over the course of a few evenings was captivated by Ondaatje's finest novel to date. The story is simple, almost mythical, stemming from a family on a California farm that is ruptured just as it is about to begin. Two daughters, Anna and Claire, are raised not just as siblings but with the intense bond of twins, interchangeable, inseparable. Coop, a boy from a neighboring farm, is folded into the girls' lives as a hired hand and quasi-brother. Anna, Claire, and Coop form a triangle that is intimate and interdependent, a triangle that brutally explodes less than thirty pages into the book. We are left with a handful of glass, both narratively and thematically. But Divisadero is a deeply ordered, full-bodied work, and the fragmented characters, severed from their shared past, persevere in relation to one another, illuminating both what it means to belong to a family and what it means to be alone in the world. The notion of twins, of one becoming two, pervades the novel, and so the farm in California is mirrored by a farm in France, the setting for another plot line in the second half of the book and giving us, in a sense, two novels in one. But the stories are not only connected but calibrated by Ondaatje to reveal a haunting pattern of parallels, echoes, and reflections across time and place. Like Nabokov, another master of twinning, Ondaatje's method is deliberate but discreet, and it was only in rereading this beautiful book--which I wanted to do as soon as I finished it--that the intricate play of doubles was revealed. Every sign of the author's genius is here: the searing imagery, the incandescent writing, the calm probing of life's most turbulent and devastating experiences. No one writes as affectingly about passion, about time and memory, about violence--subjects that have shaped Ondaatje's previous novels. But there is a greater muscularity to Divisadero, an intensity born from its restraint. Episodes are boiled down to their essential elements, distilled but dramatic, resulting in a mosaic of profound dignity, with an elegiac quietude that only the greatest of writers can achieve. --Jhumpa Lahiri
Posted by 1000myths at 10:13 AM No comments:

The Power of Oprah

It's the big test and Oprah's laying it on the line. She's going to see how much power she's got. She's endorsing Barack Obama and if he gets the nomination she's our 21st century kingmaker and Barack has some heavy debts. If he doesn't make it. She hasn't lost much except a little face and "the system" wins.
So the question is "Can you beat the System or not?"
Posted by 1000myths at 9:58 AM No comments:

Bushspeak - A Forked Tongue Masterpiece
Posted by 1000myths at 7:50 AM No comments:

Suppose, for a moment, that the Heritage Foundation were to put out a press release attacking the liberal view that even children whose parents could afford to send them to private school should be entitled to free government-run education...

And conservative opposition to giving every child in this country access to health care is, in a fundamental sense, un-American.

He makes a clear and cogent argument for a universal health care system and makes the neo-con Bush argument against it seem absurd - which it is. How indeed have we come to consider 12 years of free education for all of the children in our country an un-alienable right, and access to health care -socialistic?

Even the most casuist Jesuits would blush at this kind of rationalisation.

Wake up America, you're being conned - again!

In the home, in the workplace, with her children and on the campaign trail, Michelle Obama just keeps moving on.
She is proving that today's women is completely capable of wearing many hats and looking good in every one.
Win lose or draw, the Obamas are injecting a fresh, passionate and articulate flavor to this country's political scene and I believe, that it will signal a new era in American politics with politicians finally accepting the fact that American voters will no longer be fooled by the tired rhetoric, vain promises and spin that have been the substance of discourse up until now.

In a sense, we must thank our very lame duck president. He went so far over the top with his "shock and awe" and similar theatrics that people have now decided that:
"that's enough and we're not going to take it any more"

The Road to Happiness is not paved with Gold

A reading list for anyone who is seriously seeking a path to happiness courtesy of:

A short time ago I read a piece in the NY Sunday Times about some "poor" millionaires in Silicon Valley who were having a hard time making ends meet on 7 million dollars a year. They felt so "poor" compared to their billionaire neighbors. Some kind of a disconnect?
Tell me.

Maybe it's just the "Dog days of summer" combined with a darker side of my "Golden Years" but whatever it is, I'm losing my enthusiasm for the real political scene. The long, drawn out melodrama that we call the 2008 Presidential Campaign. So I'm going to play Political Fantasy instead and put together a "what if" scenario of my own.
First, I'll fast wind past the conventions and announce the winning ticket.

For the Democrats, from Hawaii, by way of Chicago, the first Democratic, non-white nominee for President of the U.S.:
47 year old Barack Obama and his running mate, the ex-senator from North Carolina and second-time -around nominee for V.P.; 55 year old John Edwards!

For the Other Guys: The ex District Attorney who put Laura Helmsley in Jail and went on to star in the New York City 9/11 disaster : Rudy Giulianni and his running mate, the TV actor and ex-senator from Tennessee: Fred Thompson.

Round one: Guilianni leads with malicious slander and tries to "Swift Boat" Obama with undocumented charges of corruption and bribery. Obama retaliates with concrete proof that the charges are false but refuses to join in the mud-slinging contest. Meanwhile, Michelle Obama and Elizabeth Edwards score a knockout at the League for Women Voters "Presidential Wives' Debate" . (Mrs. Guilianni was unable to participate in the debate due to the illness of her dog.)
To be continued...

You'll see and end to bribery and corruption in Washington just about the same time you see pigs in the skies. "It's the nature of the beast" not the pig- just the politicians. That's also why our brave Democratic legislators will probably not do a damned thing about Iraq nor will the DNC be able to put a qualified leader into the White House.
"You guys just don't get it"
Posted by 1000myths at 6:52 AM No comments:

Exotic dancers' 'stigma' too much for charity

Exotic dancers' 'stigma' too much for charity
In the land of hypocrisy, the honest man is a fool.
Posted by 1000myths at 6:45 AM No comments: