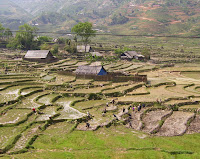 In the three weeks since I returned from Vietnam, practically every publication I read has published lead stories on the upcoming economic "explosion" in Vietnam, (including the New York Times, The Economist, Newsweek, Prospect, The New Republic and more)

It was one of the reasons I felt some urgency about making my trip: it's all going to be very different in a couple of years. When I was in Saigon, I was watching CNN and there was an interview with a major Chinese industrialist who told the CNN reporter that he was moving all of his operations to Vietnam by the end of 2009.
Here's why:
The major cities Ho Chi Minh/Saigon and Hanoi are already bursting at the seams - traffic and pollution are incredible but there is still plenty of land available for development and exploitation.

However, there is a dark side to Vietnam and it made me hesitate about staying for more than a visit. The people are for the most courteous and apparently friendly but beneath the surface there is a strong feeling of resentment towards foreigners, particularly the Chinese, Americans and the French each of whom invaded Vietnam and occupied for significant periods of time. The Americans had a relatively brief and quite violent encounter with the Vietnamese in the 1970's but their predecessors, the French came early (1859) and stayed late ('til 1954).
The French fought hard to retain their Asian colony the war lasted nine years and left a lot of scars.

In his recently published The Boat, Nam le, the author describes how his father was conscripted into the South Vietnamese Army and fought alongside the American Army: asked how he could fight on the side of the Americans, after what he witnessed at My Lai, he replies: “I had nothing but hate in me, but I had enough for everyone.”

In the past six years I have traveled extensively through eastern Asia but Vietnam is the only country I have visited in the region where almost no signs (advertising or other) are written in English or any language other than Vietnamese. The children are now studying English in school but hardly any of the adults I met spoke English and only my Vietnamese contemporaries, spoke French.

The Hmong people who I encountered in mountains of the north, were congenial and pleasant but they have some "history" with the U.S. and are naturally more friendly than the Vietnamese.
Posted by 1000myths at 10:52 AM 1 comment: