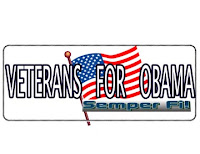 This is one contribution that I can make on my own. If there are any other vets who would like to carry the colors of the "1st Obama Brigade" send me an e-mail and I'll send a FREE BUMPER STICKER to the first 100 vets.
Posted by 1000myths at 5:08 PM No comments:

Are you old enough to remember the "bad ol days", before P.C., the days of radio shows like "Abie's Irish Rose","Jack Benny & Rochester" and the 1000 year old man etc. I think we laughed a lot more when we weren't worrying (too much} about saying the wrong thing. OK so it was wrong and I guess we should have known better but my point is that if we can't laugh at ourselves - we're in trouble. McCain and I are almost contemporaries. I was born two year before he was so I think it's OK to make jokes about his age since I frequently make jokes about my own. I think I might have been a decent president if I had been elected eight years ago but I don't think I'm really up to the job now and neither is McCain and it's for the same reasons. We're both grumpy old men who often forget where we left our glasses or the car keys and we have to pause a little to remember the names of our grandchildren or the first name of the French President and although I aced history and gography in school, I can't remember which countries border on Lebanon or Iraq without looking at a map but the main reason we shouldn't be in the White House is because we can't inspire the young people of the world to go out and make a difference but Barack Obama can, almost the way JFK could.
Considering the kind of campaign my contemporary is running now- he should be treated as a joke.
As my Jewish friends would say:
"I laugh so that I don't cry"
Posted by 1000myths at 4:52 PM No comments:

About Barack Obama
Read the Article at HuffingtonPost
Posted by 1000myths at 4:20 PM No comments: